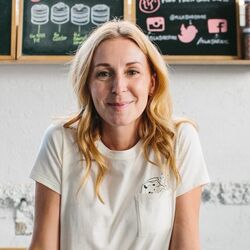 Christina Tosi (born 1981) is an American chef, author, and television personality. She is the chef, founder, and owner of Milk Bar, the sister bakery to the Momofuku restaurant group, with locations in six cities across North America.

Tosi was born in Ohio and raised primarily in Springfield, Virginia to an agricultural economist father of Italian origin and to an accountant mother. After studying to become an electrical engineer for a year at the University of Virginia, she spent time in Florence, Tuscany, Italy, to see if she wanted to be a translator. Eventually, she graduated from James Madison University. After graduating, she moved to New York and enrolled in the French Culinary Institute's pastry arts program.

Tosi entered the culinary field at the fine dining restaurant, Bouley, and then advanced to wd~50. In 2005, she helped to write wd~50's Hazard Analysis Critical Control Point plan.

On the recommendation of Wylie Dufresne, David Chang hired Tosi in 2005 at Momofuku to write his food safety plans and help administratively with the NYC Department of Health. Chang was so impressed with Tosi that he hired her to run their pastry program. There were no desserts on Chang's menu when Tosi came on board, and she created her own pastries, putting her extreme spin on childhood favorites, from cereal-milk panna cotta to fried apple pies with sour-cream ice cream and toasted miso.

In 2008, Momofuku Ssam Bar's adjoining next store space became available, and Chang encouraged Tosi to open her own shop, which she named Milk Bar. She had free rein to develop new recipes and the menu soon featured her trademarked Cereal Milk, Compost Cookies, Crack Pie and Candy Bar Pie. In December 2009, Anderson Cooper appeared on Regis and Kelly professing his love for Milk Bar and its Crack Pie.

By 2012, Milk Bar had grown from one retail sales location in the East Village of Manhattan to nine retail outlets in New York City, one in Toronto, Canada (opened in 2013), three in Washington, D.C. (opened in October 2015, February 2018 and May 2018) one in Las Vegas, Nevada, at the Cosmopolitan of Las Vegas (opened in September 2018). Tosi opened her first Boston-area store in Harvard Square in Cambridge, Massachusetts, in a unique partnership with &pizza, a Washington D.C.-based pizzeria chain. The Boston store was Tosi's 16th Milk Bar, and by February 2019, Milk Bar employed 381 people across North America.

In 2015, Tosi was asked to serve on the judging panel for the Fox reality TV cooking competition shows MasterChef and MasterChef Junior. She appeared in a television ad for Subaru in 2014. She also did promotional work for American Express, Kellogg's, and Estée Lauder.

In 2018, Tosi and her restaurant were featured on the Netflix Documentary Chef's Table, in an episode that aired on Apr 13, 2018.

Christina Tosi has been featured in a variety of national publications:

Tosi is also a cookbook author.[1]

Momofuku Milk Bar, Tosi's first book, was published by Clarkson Potter in October 2011. This book mostly contains recipes of the desserts that are sold at Momofuku Milk Bar.

Many reviewers praised her first book. Lisa Messinger wrote, "Tosi is a talented new voice you want whispering in your ear as you bake."

Although reviewers praised the sweet concoctions that were included in the first book, a reviewer for the Washington Post wrote that because the book is not written for the home cook, she found it very demanding to prepare the recipes since they are not tested for use in a home kitchen, some of the ingredients are not easy to obtain (glucose, gelatin and freeze-dried corn powder were mentioned), preparation of some needed intermediate ingredients are quite laborious and many home ovens do not operate in the same way as a commercial oven. Measurements used in the book are both by weight, as preferred by professional cooks, as well as by volume, as usually preferred by amateur cooks and popular food magazines. A reviewer for the Austin Chronicle wrote that preparation of some of the recipes was "a massive pain" to prepare due to the fact that there were many "sub-recipes" to be prepared before making the main item.

Milk Bar Life, Tosi's second book, was published by Random House in April 2015. This book contains recipes for dishes, some savory, that the author and other chefs may prepare for themselves and friends during their off hours.

In contrast, a reviewer of the second book, Milk Bar Life, liked it better since it included recipes for more savory dishes, uses easier-to-obtain ingredients, and appears to be more geared to the home cook than the first book.

Jenny Rosenstrach of the New York Times Book Review wrote of her second book, "It's impossible not to be charmed by the chatty Tosi and her hot pink and bubble-letter-filled never-never land..." The book includes tips like making your own Lambrusco using red wine in a Sodastream.

In 2012, Tosi began marketing cookie mixes through Williams-Sonoma stores. The cookie mix venture was replaced in 2015 by an exclusive distribution deal with Target.

In 2018, Tosi and Milk Bar had executed several partnerships, including cookies with JetBlue, a lip balm with Glossier, a clothing and cookie mix collection with Madewell, and SoulCycle's first ever food offering in studios, the SoulFuel cookie.